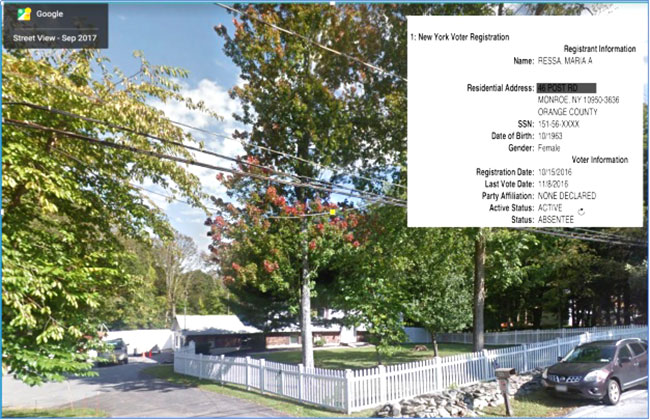 Ressa’s Orange County, New York home, according to ‘Google Street View’; inset, facsimile of a US firm’s report on her voter registration (exact address blocked out).

OR con woman, con person. Whatever.

Rappler CEO and Editor in chief Maria Aycardo Ressa has successfully fooled Western media that she is a Filipino journalist with little means who is fighting her country’s authoritarian President bent on suppressing media dissent.

The reality is that she is a well-off American citizen, who acquired Filipino citizenship in 2004 to make it legally easier for her to work as a manager at ABS-CBN Broadcasting, a media company where foreigners are banned by the Constitution from participating.

The Rappler website she claims to be leading the fight against a strongman President was set up in 2011, initially as a weapon for President Aquino’s assault against the Supreme Court by removing Chief Justice Renato Corona.

It was its reckless, journalistically unprofessional undertaking of that role that got it in serious legal trouble. It posted a libelous report that Corona was using an SUV provided by a businessman, whom it identified by name and whom it claimed was engaged in “human trafficking and drug smuggling.” The businessman of course was so angry to be maligned as such, and filed the libel suit.

After that aim of removing the Chief Justice was achieved, Rappler has been the Yellow regime’s apologist, financed in so many ways by government contracts and a Yellow oligarch’s covert financial support.

US mouthpiece
Parallel to that role has been its function as the mouthpiece for US interests, its neoconservative ideology and its anti-China racism, compensated by a P100-million funding from American outfits North Base Media and Omidyar Network, two entities known to advance US political and economic dogmas in the world. (Omidyar Network promised to bankroll Ressa’s legal defense with a $500,000 kitty.)

That got Rappler into another serious legal trouble. First, in taking that foreign money, it violated the Constitution’s ban on foreign participation in media, a fact which Ressa appears to have been ignorant of as Rappler even boasted about it in an article.

Ressa tried to wiggle out of that legal trouble by claiming that the investment was in the form of securities. But she only dug her quagmire even deeper, as Rappler failed to pay capital gains taxes of P133 million in issuing those securities.

She’s lied to the world to cover up these boo-boos, claiming these suits were simply Duterte’s way of shutting her up.

Ressa has taken her citizenship duties quite seriously — her American citizenship, that is. She has voted in nearly all US national elections, the last one on Nov. 18, 2016 for the presidential elections that year. She has never voted in Philippine elections.

Under US protection
Contrary to her portrayal as a hapless journalist struggling against a powerful state, she is under the protection of the world’s most powerful nation, the US, whose embassy here quickly issued a statement after her arrest that it expected Ressa’s case “to be resolved quickly in accordance with relevant Philippine law and international standards of due process.”

Unless she perjured herself in her US voter’s registration, Ressa’s residence is in an upper-class suburb in Monroe, Orange County in New York. The median income in
Ressa’s neighborhood is $160,000, according to US census data, putting her in the top 8-percent income bracket in the US. A property a block away from Ressa’s residence was being advertised for sale at $520,000 (P27 million).

For the CEO of a website that provides beggarly salaries to its staff, who are told that they are part of a glorious crusade, Ressa, sources claimed, lives in a posh Bonifacio Global Village condominium, where the rent is at least P150,000 per month.

What bolsters the truth of this claim is that Ressa went to the extent of violating the Securities and Exchange Commission’s reportorial requirements and refused to report her residence. In documents submitted to the SEC, in which incorporators of Rappler Inc. and then Rappler Holdings are required to report their residences, Ressa reported hers as Rappler’s first headquarters (at Antel Global Center), instead of her residence.

A fraud
We have to report details on Ressa to expose her as a fraud, as she hasn’t let up on her campaign to paint the country black, as one moving towards dictatorship and successfully suppressing the press.

Only a week ago, the New York Times prominently run a front-page article titled “A Journalist Trolled by Her Own Government,” with its lead paragraph being: “Harassing journalists is one of Rodrigo Duterte’s specialties.”

How many of the NYT’s 5 million print and digital subscribers in the US and in the world will bother to investigate if the article’s preposterous claims on this unimportant country are accurate? How many will simply accept the “venerable” Times’ claims on bad things supposedly happening in this far-off country?

Ressa’s claim that she is “trolled by her government” has been totally disproven with a recent unprecedented development: Over 40,000 (as of submission deadline for this column) Filipinos here and in the US have signed a petition through the unassailable change.org asking the Justice department to revoke her Filipino citizenship. Can she claim these 40,000 are Duterte trolls?

Just to cover up for her website’s libelous articles, and her boo-boo as a CEO that led to tax-evasion charges, Ressa has seriously damaged the Philippines’ and its media’s reputation in the world.

In contrast to Ressa, the owners of the Philippine Daily Inquirer — which had been more critical of Duterte — when faced with a tax-evasion case and told to relinquish their hold on a lucrative government-owned Mile Long property, didn’t cry to the world that theirs was a case of press suppression.

Delicadeza
Since she is an American, we can’t expect Ressa to have a sense of delicadeza. Whether the libel suit was under Duterte’s direction or not, the Rappler report claiming a businessman was into “human trafficking and illegal drugs” was so patently libelous, which Ressa as the site’s editor should not have allowed to be posted, and even updated.

Contrast her stance to that of former Top Gear Philippines editor Vernon Sarne who immediately resigned his post, when faced with a libel suit that appeared to have some validity.

Ressa has been able to get away with her lies partly because, especially in the case of American media, such claims fit their narrative — after Duterte expressed his disdain toward the US and launched his war against illegal drugs — of a global drift towards authoritarianism. Western journalists, since the Philippines is really an unimportant country for them in their world, have been too lazy to fact-check Ressa’s false claims.

In all of Western media’s unquestioning coverage of Ressa’s claims, there is absolutely no report at all on who filed the cyber-libel suit against her and what the charges entail. They simply swallowed hook, line and sinker Ressa’s claim that the charge was merely Duterte’s way of harassing Rappler, for its “critical” coverage of his administration.

Not a single Western article reported that Rappler’s libelous article was posted as part of its enthusiastic, mercenary participation in Aquino 3rd’s campaign to remove Chief Justice Corona, or that the tax-evasion case was because of its attempt to wiggle out of the constitutional ban on foreigners in media.

Ressa also speaks the way Americans do, and as a former broadcast journalist she knows how to use sound-bites, such as “hold the line” and “weaponizing” laws.

Ressa is an American citizen who even conscientiously votes in US elections, and has an upper-class residence in New York. Except once in 2004, she uses a US passport in her numerous travels to her country and in the world.

US media and even the American embassy swiftly went to her defense when an arrest warrant was issued against her. Rappler is funded by US entities, and has always echoed American views, especially that on the South China Sea territorial disputes.

There is a certainly a case for the claim that Rappler has been the US’ media instrument in the Philippines, much more intrusive and dangerous as it is in the new media of the world wide web.