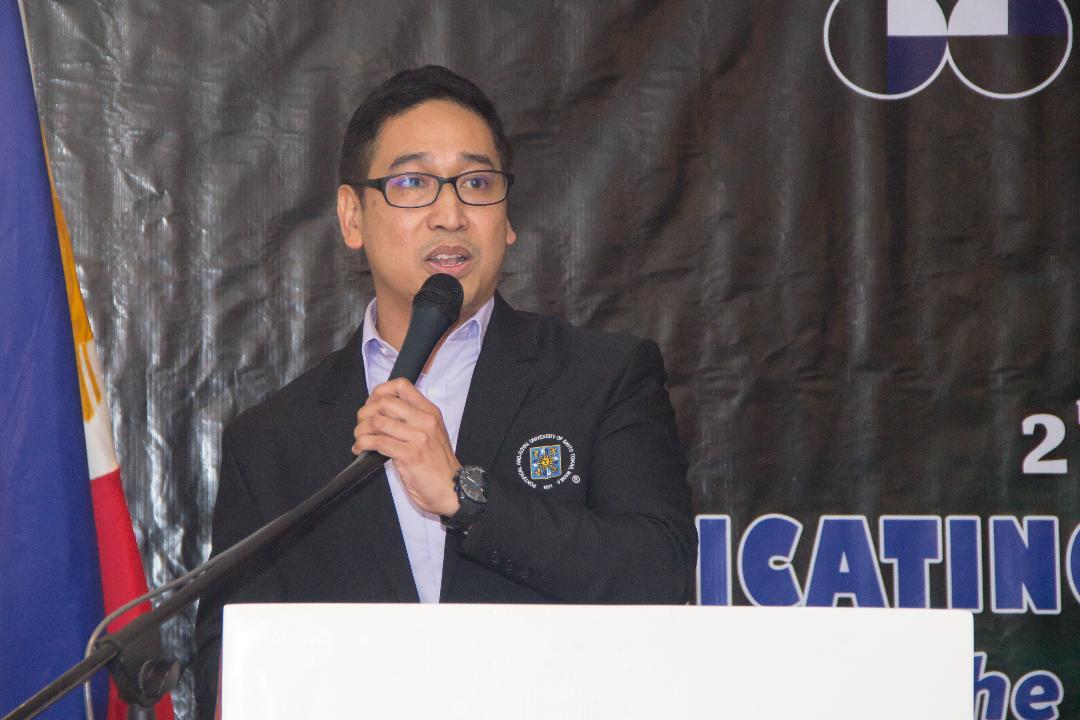 Dr. Ross Dizon Vasquez, lead researcher on pukpuklo, talks about the study during the symposium on The Values of Philippine Flora and Fauna. (Photos from Val Zabala, DOST-NRCP)

Researchers from the University of Santo Tomas found that polysaccharides extracted from Codium species, locally known as “pukpuklo” (a seasonally-available seaweed), are effective against cancer cells and destructive enzymes associated with cancer metastasis.

The researchers, headed by Dr. Ross Dizon Vasquez, evaluated the inhibitory potential of the polysaccharides fractions isolated from Codium species. They found that the seaweed fights destructive enzymes that aid metastasis or spread of cancer to different parts of the body.

Polysaccharides are carbohydrates such as starch, cellulose, or glycogen whose molecules consist of a number of sugar molecules bonded together. This kind of carbohydrates are used by the body in storing energy, sending cellular messages, or for providing support to cells and tissues.

Aside from its potential anticancer benefits, pukpuklo has also been evaluated for its effect on the skin. Dr. Vasquez said that it induced healthy skin growth and promoted faster healing of rat’s skin that was exposed to UVB radiations.

Their next target of study is possible cosmeceutical application or formulation of anti-aging compound from pukpuklo. Cosmeceuticals are cosmetic products with bioactive ingredients purported to have medical benefits.

The Codium species were collected in Ilocos Norte, Aklan, Iloilo, and Cagayan province. Pukpuklo, a favorite Ilokano dish, is known as a good source of dietary fiber, amino acids, and minerals. However, little is known about its medicinal value and further studies have yet to be conducted to explore its use in the field of medicine.

Studying the Philippines’ flora and fauna
The Codium research was among the six completed projects that were presented at the symposium on “The Values of Philippine Flora and Fauna”, organized by the Department of Science and Technology-National Research Council of the Philippines (DOST-NRCP).

Dr. Irene V. Fariñas of the Department of Health (DOH), who was among the panel of reactors in the symposium, said that the DOH welcomes this potential drug discovery. This basic research on Codium as potential inhibitor of tumor growth, could possibly lead to the development of low cost alternative to commercial drugs for the treatment of cancer.

“Researchers, do not be afraid to translate your work into what’s good for the society,” Usec. Guevara addressed the symposium participants.

She added that the Philippine biodiversity is vast and the country’s local species are being studied by foreigners. “We lack researchers who can study our own biodiversity,” she emphasized.

Meanwhile, Dr. Christine C. Hernandez, associate professor at the Institute of Chemistry, University of the Philippines Diliman, commended the government especially DOST-NRCP for its efforts in championing research and development. She said that the funding support from government agencies like the DOST-NRCP enables them in the academe to support the work of their students. It also enables them to encourage more of their students to work for them and hopefully to inspire them to pursue PhD degrees, she added.

DOST-NRCP also funded the innovative researches presented in the symposium which are important inputs to policy development, especially in terms of sustaining and protecting the country’s biodiversity. These basic researches on natural resources are vital not only to the local pharmaceutical industry, but for the country’s socioeconomic development, as a whole.