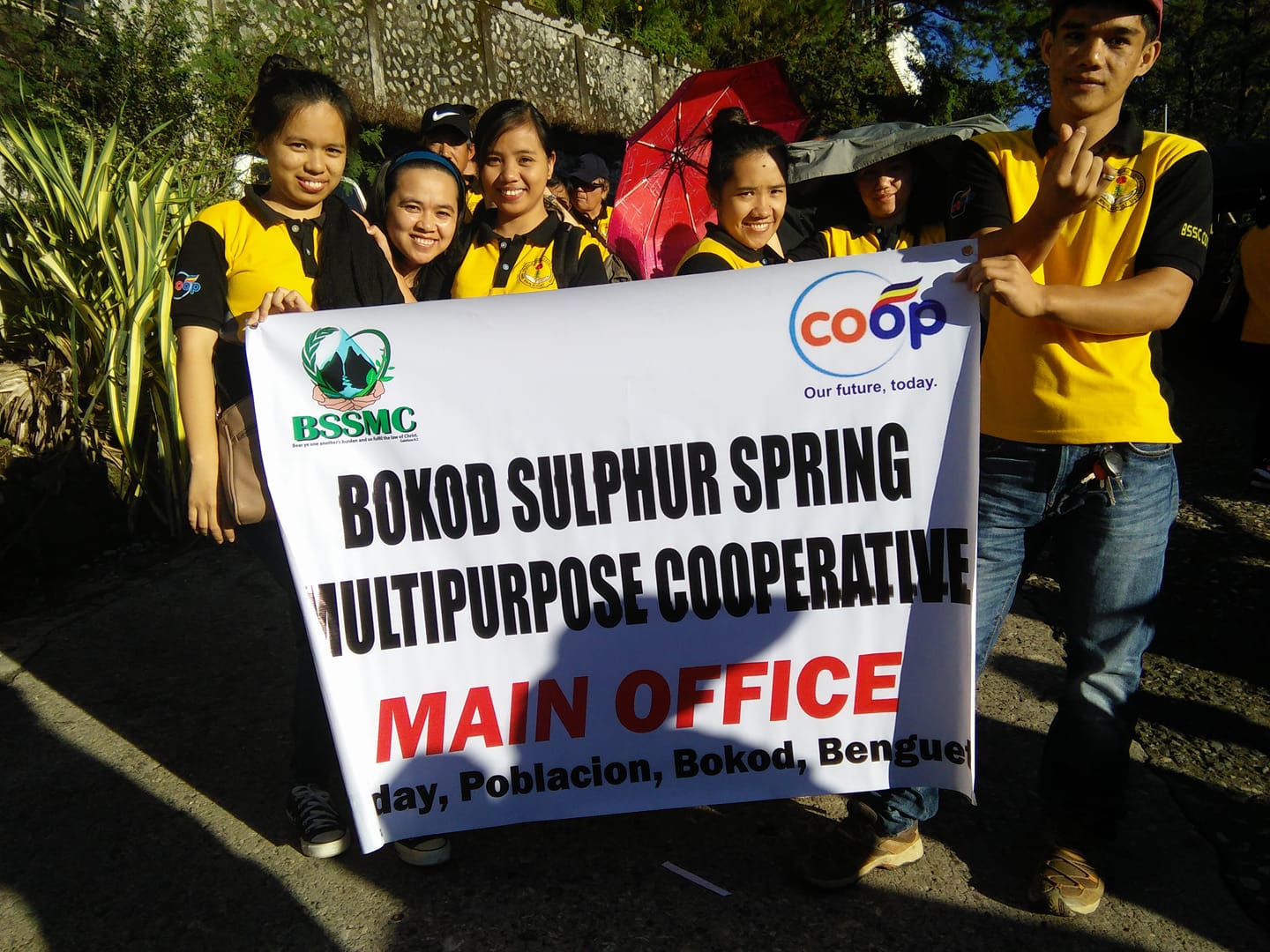 Bokod Sulphur Springs Multi-Purpose Cooperative members take part during the Adivay Festival in celebration of the founding anniversary of the province of Benguet. (photo courtesy of BSSMPC)

BOKOD, Benguet — Barely four years in existence, a merger of two cooperatives and an association  is speeding up as the fastest growing coop in the province of Benguet.
From  micro scale,  the Bokod Sulphur Spring  Multi-Purpose Cooperative (BSSMPC)  borne thru the  merger of two small coops, the Tikey MPC and  Bokod Agricultural and  Fishery Coop,  and the Barangay Power Association (BAPA),  has   leveled up into a large coop.
The BSSMPC was established in 2014,  but it did not operate   because there was no manager to handle its supervision. It only became operational the next year when Betty Calawa came in as its manager.
The coop started with zero balance or no capital to speak of, but they were ready with the  strategic plan and policy guidelines,  said Calawa. They could not withdraw   the deposited consolidated cash of the merged two coops and association supposed to be the initial capital. Withdrawal was only made possible in 2016.
Calawa recounted that they started operation in 2015   with only three volunteer staff who worked as information technician, loan officer and treasurer. She, as manager, served as the bookkeeper.
They had to go to the people of the community and encourage them to join.  It was really a challenge as there were no coops that prospered in the town of Bokod, Calawa shared.   People   wanted to join established and  stable coop that many would rather   become   members in coops in nearby provinces and municipalities.
To establish one stable coop was the dream of Board of Director Nicolas Wales.
“What we did every day was to take turns in going out in collecting money from members pooled as savings deposit. At the end of the day, we make a cashbook and remit to the Board of Directors,” said Calawa. Until such time for a week, “we were able to collect a total of P300, 000.00,” she added.
Officers and the members of the Board of Directors who were also available were very supportive and took time in helping the volunteers in going around barangays to collect.
Series of PMES were continuously held in the barangays whether there were recruits or none. Two to three seminars were simultaneously held such that in two weeks time, 100 individuals were recruited as members.
In order to generate funds and for the capital share to roll, the coop adopted the micro-financing scheme loaning out money to its members. Loan repayment was done weekly for six months.
In its first month, it generated a total revenue of P23, 000.00. This is added up to the capital which allowed it to roll.
The coop’s deposited consolidated money amounting to P717, 000.00 was finally withdrawn in 2016 and was added up to the rolling capital making its revenue rapidly balloon.
Its assets surged from P22.4 million in 2015 to P214M in 2018 scaling up from a micro to a large coop, said Member Relations Officer Ariel Laguitao who shared the coop’s standing in a recent coop event in La Trinidad.
Membership drastically increased from 1,382 members in 2015 to 6,283 in 2018. Members come not only from Bokod but from the towns of Kabayan and La Trinidad and as far as Bambang in Nueva Vizcaya. They are mostly farmers .
Aside from savings and credit, other services include unified products and services such as remittance from abroad, travel bookings and bills payment, social services such as mortuary and health care assistance, livestock loan and insurance, agri-trading store, meatshop, and store for gadgets. They also have automated teller machine.
With main office at Poblacion, Bokod, the coop expanded. It has three branches located in Central Kabayan, another in Beckel in La Trinidad and in Gambang, Nueva Vizcaya. A satellite office is also established in Ambangeg, Daclan, Bokod. Due to office expansion, staff complement increased with a total of 48 which is one of the coop’s aim which is to provide employment.
Laguitao said one of the factors which kept the coop intact is the cultivation of trust and confidence from among the members.
He also elaborated some of the best practices of the coop such as character-based lending policies in the approval of loans; provision of loan protection insurance to members from 18-70 years old; provision of assistance thru seminars and trainings to various organizations and 4Ps beneficiaries; promotion the value of savings to students through special savings; annual conduct of farmers’ forum to farmer-members; support to environmental concern through partnership with Philgeps on Reforestation Project; compliance to labor law standards; mortuary and healthcare assistance to members; continuous innovation of loan products and various financial services for members; enjoying various free assistance on trainings and seminars of the Department of Agrarian Reform; established strong partnership with other cooperatives; strong involvement to community activities and partnership with local government units and barangay officials; and continuous provision of livelihood programs to farmer-members.
The staff shared that started the operation by laying all the operations to the Almighty coupled with the conduct of regular bible studies.
The BSSMPC has shown that with thrust in God , trust and confidence among members, and hardworking and committed staff and members, there’ no way to go but succeed. — Susan C. Aro