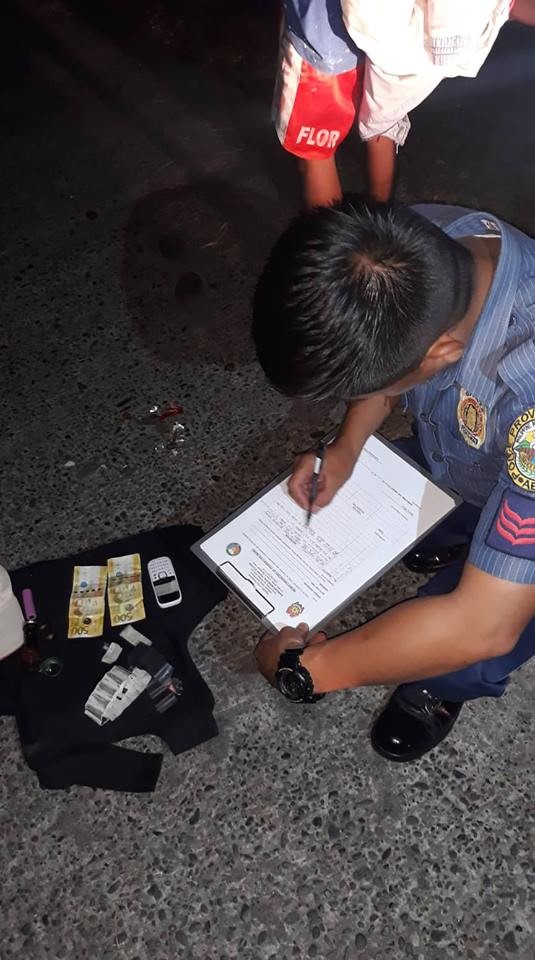 A member of the Bangued Municipal Police Office inventories items from Raffy Bondame Reballos, which include two pcs of Php500.00 (used as buy-bust money), one cherry mobile cellular phone, and one live ammunition for cal. 9mm, after he was entraped in a buy bust operation on Tuesday, January 15, at around 10:00 p.m. in Bangued Abra. (Bangued Municipal Police Office Photo)

CAMP MAJOR BADO DANGWA, La Trinidad, Benguet — A house painter is now in hot water after he is charged of the sale of illegal drugs and for violation of the Commission on Election’s gun ban.
Chief Supt. Rolando Z, Nana, Cordillera police regional director identified the suspect as as Raffy Bondame Reballos, 32, single, house painter, and a resident of Sitio Nangaycayan, Brgy. Zone 7, Bangued, Abra.
Reballos was arrested in the act of selling one heat sealed transparent sachet containing suspected shabu one of the police operatives during the entrapment operation set by authorities about 10:00 PM of January 15, 2019 in Zone 5, Bangued, Abra.
A body search in the presence of a media representative and two barangay officials yielded two pcs of Php500.00 used as buy-bust money, one cherry mobile cellular phone, and one live ammunition for cal. 9mm were recovered in the possession of Reballos.
Nana said, Reballos together with the recovered pieces of evidence were brought to the Regional Crime Laboratory Office (RCLO) at Camp Major Dangwa for examination and proper disposition. He is now facing charges for violating the provisions under Sec.5 and Sec. 11 of RA 9165 otherwise known as the Comprehensive Dangerous Drugs Act Of 2002 and Election Gun Ban. – Larry Madarang