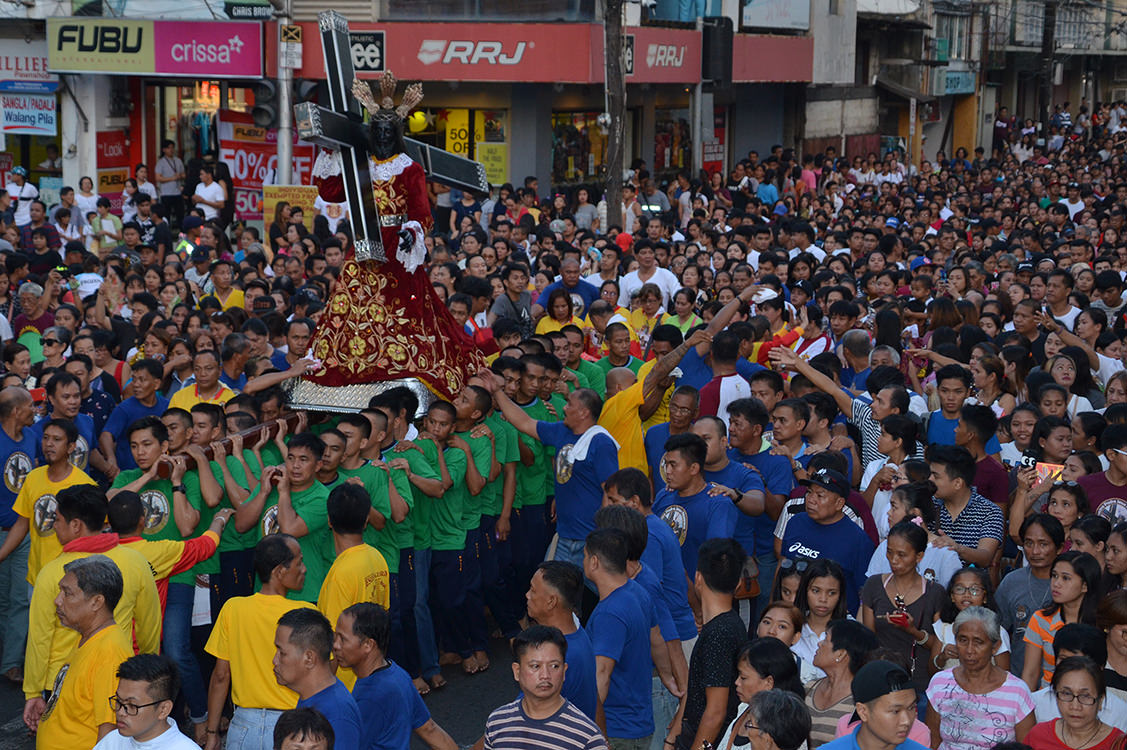 TRASLACION – More than a thousand devotees join in the ‘Traslacion’ of the Poon Nazareno of Quiapo or the Black Nazarene of Quiapo on November 30, 2018 held at the major thoroughfares of the City of San Fernando, La Union, the province’s capital. (Photo by: Vic Villanueva/PIA-1)

SOME OF us only witness on television Catholic devotees who flock to Quiapo, Manila to join and touch the Poon Nazareno (Black Nazarene) which is believed by many to heal sickness.

SOME OF us only witness on television Catholic devotees who flock to Quiapo, Manila to join and touch the Poon Nazareno (Black Nazarene) which is believed by many to heal sickness.

For the Ilokanos, it is of great repute that the image set foot in the province of La Union and the Catholic faith to the Poon which is passed down from generations to generations can be remarkably seen.

This year, it is the first time for some to behold the miraculous Poon Nazareno, which arrived in the morning of November 26 in San Fernando City.

As soon as installed inside the St. William the Hermit Cathedral, Holy Masses were conducted regularly at 6 a.m,, 12:00 noon and 5 p.m. administered by the monsignors of the the different towns.

On a daily basis since its arrival, thousands of devotees patiently line-up for the ‘pahalik’, a customary touching of the image which is open to the public.

“Our veneration of the Black Nazarene is rooted among us, specially those who identify themselves with the suffering of Christ which the image depicts and those who relate their poverty and daily struggles to His passion,” said cathedral parish priest Rev. Fr. Roberto Benito L. Collado and at the same time, over-all coordinator of the pilgrimage, in one of the Holy Masses.

“The shared efforts of our devotees in welcoming the Poon and their participation on the different undertakings is very much valued,” Fr. Collado added.

On Nov. 30, devotees also experienced the successful conduct of the ‘Traslacion’ which made its way to the major thoroughfares for everyone to catch a sight of.

‘Traslacion’ which can be simply described as the procession wherein thousands herd just to have a glimpse despite heat, fatigue, or possibility of being trampled upon by the crowd. They unwearyingly pass their white hankies to ‘mamamasan’ (bearers) for these to be wiped on the image.

The passing and wiping of the handkerchiefs and when used, is believed to bring healing and forgiveness of sins.

Usually, the image is placed in an ‘Andas’ or ‘carozza’ and being pulled with two thick ropes, but here, the image was carried by the about thirty-five bearers and protected by around fifty honor guards wearing color coded shirts.

While some disapprove of the ‘Traslacion’ because it is said to be infamous for the casualties that result from the jostling and congestion, Ilokanos were very obliging and cooperative to ensure that everyone is unharmed.

The image of the Poon found its home in the province until Dec. 2 until it was brought back to Quiapo.

According to history, the image was carved by an unknown Mexican from a dark wood in the 16th century in Mexico and then transported to the Philippines in 1606 and depicts Jesus en route to his crucifixion.

In 1650, Pope Innocent X granted recognition to the lay Confraternity of Santo Cristo Jesús Nazareno for the promotion of the devotion to Jesus through the icon.

It was housed in several churches near Manila in the early decades, arriving in Quiapo Church in 1787 where it has been enshrined ever since. (JNPD/AHFF/PIA-1)